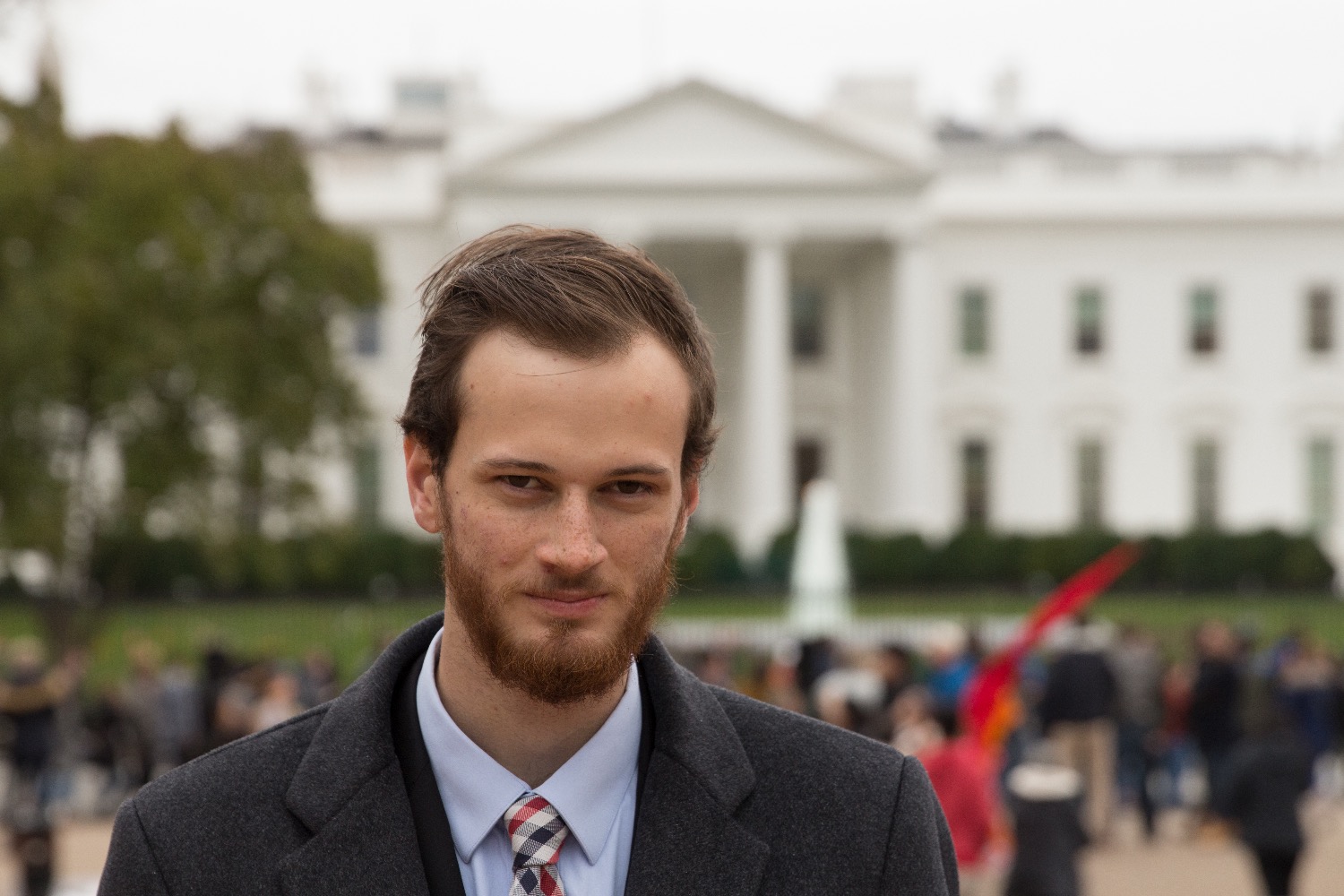 Isaac Windes spent 4 months as part of Arizona's largest news bureau in the nation's capitol, reporting on environmental issues and Indian Country. He worked on the digital publication while supporting broadcast live-streams. Syndicated work was published in over 50 publications in the U.S. and Canada. Notable reporting locations included the Capitol, the Pentagon and surrounding agencies.

WASHINGTON – States, federal and Mexican officials hailed a binational agreement this fall that they said could lead to a radical shift in how the region prepares for and responds to drought. But three months later, they appear no closer to a drought contingency plan, as negotiations have pitted states and water districts against one another, as the U.S. tries to hammer out details of the plan. The deal signed at the end of September extends guidelines that were set up under a 2012 agreement t
Cronkite News - Arizona PBS • 30th November 2017

WASHINGTON – Federal regulation of waterways may not be the first issue that comes to mind in a desert state like Arizona, but don’t tell that to Pima County cattle rancher Jim Chilton. Chilton was one of two Arizonans invited to testify Wednesday on the Waters of the United States rule, an Obama administration plan to streamline regulation of waterways. Critics charge that the plan, which never took effect, just muddied the waters and Chilton called it a “form of tyranny.” “In my view, the 20
Cronkite News - Arizona PBS • 29th August 2017

WASHINGTON – A federal court has rejected a bid to declare the Sonoran Desert bald eagle an endangered species, saying the U.S. Fish and Wildlife Service acted properly when it determined the birds were no different than other bald eagles. The ruling Monday by a panel of the 9th U.S. Circuit Court of Appeals is the latest turn in a years-long fight by environmental groups to gain protection for the desert eagles separate from other bald eagles in the U.S. Bald eagles were declared endangered in
Cronkite News - Arizona PBS • 13th October 2017

WASHINGTON – Arizona utilities and regulators said they plan to continue working toward the lower carbon emission goals that had been set in the EPA’s Clean Power Plan, even though federal officials said this week that they are scrapping the program. Environmental Protection Agency Administrator Scott Pruitt said Tuesday that he will revoke the Obama-era plan, which set emission-reduction goals for every state but which critics said ended up handcuffing states. Arizona had faced some of the na
Cronkite News - Arizona PBS • 8th September 2017

WASHINGTON – The Arizona Department of Environmental Quality got $315 million in funding for specific federal programs over the past five years – funding that could be endangered by proposed cuts to the Environmental Protection Agency budget. That was the finding of an Environmental Defense Fund analysis of the fiscal 2018 EPA budget request being considered by the House this week, a budget that cuts the agency’s overall budget from $8.3 billion to $5.7 billion. An ADEQ spokeswoman said it wou
Cronkite News - Arizona PBS • 6th November 2017

WASHINGTON – The House began work Monday on the largest tax reform push in over three decades, with most Arizona lawmakers tentatively embracing the concept even as they expressed reservations about details in the 429-page bill. GOP leaders who unveiled the plan Thursday said it will spur the economy by cutting corporate and individual tax rates, and eliminating some deductions, among other things. That economic growth would offset any reductions in government revenues, they argue. But Democra
Cronkite News - Arizona PBS • 5th September 2017

WASHINGTON – Immigration advocates vowed they would go to court to block a Trump administration plan to wind down a deferred deportation program for young immigrants, almost as soon as Attorney General Jeff Sessions announced the plan Tuesday. It was one of a range of reactions to the announcement that were swift and emotional, with one opponent saying the decision would cause “poverty, destruction and human suffering” and another calling it a “white supremacist scheme to terrorize immigrants.”
Cronkite News - Arizona PBS • 8th November 2017

WASHINGTON – A federal appeals court ruled Wednesday that an online job-rating site has to turn over the identities of anonymous users who posted comments about a company being investigated for its handling of a Department of Veterans Affairs contract. Glassdoor.com was subpoenaed by a federal grand jury in Arizona for information – including emails and IP addresses, billing address, logs of reviews, payment history and other contact information – on users who charged that the VA contractor was
Cronkite News - Arizona PBS • 31st October 2017

WASHINGTON – The Supreme Court let stand a ruling that a Scottsdale police officer was justified when he shot and killed a man who threatened two people with a knife and advanced toward officers with two halves of a pool cue in his hands. The high court on Monday refused without comment to hear an appeal from Warren Prostrollo, who was challenging lower courts that threw out his claim of wrongful death in the shooting of his son. The son, Jason, a veteran who was intoxicated at the time of the
Cronkite News - Arizona PBS • 21st September 2017

WASHINGTON – The Interior Department’s purchase of a plot of private land will allow public access to 32,600 acres of previously isolated forest land, a move that drew praise from wilderness advocates and hunters alike this week. The deal announced Wednesday opens up two parcels of public land, one in the Coronado National Forest and one northwest of Safford, that had been inaccessible because they were surrounded by private property. It was pulled off through a collaboration between state, fed
Cronkite News - Arizona PBS • 14th September 2017

WASHINGTON – A federal court Wednesday rejected a death row inmate’s claim that FBI agents and Pima County Sheriff’s deputies planted evidence that led to his conviction for the 1984 kidnapping and murder of an 8-year-old Tucson girl. The decision by a three-judge panel of the 9th U.S. Circuit Court of Appeals upheld a district court, which had found no credible evidence to support Frank Atwood’s claim and his call for a new trial. Atwood was convicted in the murder of Vicki Lynne Hoskinson, b
Cronkite News - Arizona PBS • 28th September 2017

WASHINGTON – Florence Copper officials could break ground on a $24 million “in-situ” copper mining facility by December, after an administrative appeals board last week turned down objections to the project from the Town of Florence and another opponent. The ruling by the Environmental Protection Agency’s EPA Environmental Appeals Board rejected challenges that the in-situ form of mining – which injects acidic water into copper ore deep underground, to draw it out and refine it – could pose a t
Cronkite News - Arizona PBS • 2nd October 2017

WASHINGTON – Navajo leaders expressed hope Monday that the Navajo Generating Station will be able to continue operations past 2019, after Peabody Energy said it had come up with a list of potential investors in the plant. Peabody, which mines the coal to power the plant, did not identify the prospective buyers it presented to plant owner Salt River Project, but called them “highly qualified potential investors” who expressed interest in ownership beyond 2019. SRP officials said that they will
Cronkite News - Arizona PBS • 2nd November 2017

WASHINGTON – A divided House on Wednesday approved a bill that supporters said would boost wildfire prevention efforts, in part by excluding forests from environmental requirements. Streamlining regulations will allow more logging, which removes the forest undergrowth that can feed wildfires, thus reducing the chances of a catastrophic blaze, supporters said. But critics said the bill is “just another industry giveaway” that does nothing to address the real problem, which is chronic underfundi
Cronkite News - Arizona PBS • 15th September 2017

WASHINGTON – It was the greatest political deal that was – until it wasn’t. Unless it still is. After Democratic leaders said Wednesday night that they had reached a deal with President Donald Trump to preserve DACA, without a border wall requirement, social media exploded – along with some Republican members of Congress. But official Washington spent much of Thursday walking back and parsing statements about the deal while advocates were left scrambling to find the real meaning – or shrugging
Cronkite News - Arizona PBS • 7th November 2017

WASHINGTON – Rep. Martha McSally, R-Tucson, has told House colleagues that she will run next year for the seat being vacated by Arizona Republican Sen. Jeff Flake, setting the stage for what could be a fractious primary fight with Kelli Ward. Flake announced last month that he would not seek re-election because he did not think he could win a GOP primary without resorting to the sort of incivil politics he said is causing Washington gridlock. That left the field to Ward, a vocal Trump supporte
Cronkite News - Arizona PBS • 30th October 2017

The state’s climate appears to have helped hold off, for now, a disease that has afflicted bats during hibernation in at least half of the country. Experts say Arizona, with its shorter winters and more dispersed bat populations, could act as a barrier against white-nose syndrome, which is most often contracted during the winter, when bats hibernate in moist caves and spread the fungus. The disease causes bats to use up their fat reserves too quickly, forcing them out of hibernation in frigid w
Cronkite News - Arizona PBS • 24th November 2017

WASHINGTON – The Federal Communications Commission is moving to rein in a low-cost telephone service for low-income customers that critics say will hit Indian Country hard if fully implemented. But FCC Commissioner Ajit Pai and other supporters say the reforms would close the digital divide between urban and rural Americans by ending “ongoing waste, fraud and abuse” in the program that serves more than 12 million people nationwide – and 212,630 people in Arizona as of August. The Lifeline prog
Cronkite News - Arizona PBS • 1st September 2017

WASHINGTON – Phoenix Mayor Greg Stanton said in his State of the City address this year that Phoenix had been “recognized for our leadership on sustainability,” but a new study suggests it may have room to improve. The study by a U.N.-backed nonprofit called the Sustainable Development Solutions Network scored the 100 most-populous U.S. cities on the Sustainability Development Goals set by the United Nations. Those include criteria such as poverty levels, water scarcity, climate action and econ
Cronkite News - Arizona PBS • 24th August 2017

WASHINGTON – Interior Secretary Ryan Zinke said Thursday he will not call for the removal of any national monuments but will recommend downsizing an unnamed “handful” of monuments in a report to the White House. The report follows a four-month review of national monuments that were created or expanded since 1996 by presidents invoking the Antiquities Act, in what critics have called an overreach of federal authority. Environmental groups had feared that the review could lead to rescinding the
Load More Articles
Close ✕